Young Harrison Tweed caught my eye early on, while still in the whelping box.  As he grew into a confident puppy and displayed his tails up attitude, it was easy to see that this boy was a natural.  At just 7 months of age, he entered the show ring for the first time.  At his first show, he was Winner's Dog, Best of Winners, and Best Opposite Sex to his mother, going over champions for the win!  At the end of his first weekend out, he came home with a major and 6 points.  Tweed was jointly handled to his wins by both his new owner-handler, Rosie Swanson, and me.  He was bred by Adrian & Linda Sanchez and me, and is loved and owned by Rosie Swanson.  Tweed was also second in the 6-9 Division (only defeated by our Havannah) of the STCA National Specialty Sweepstakes in 2013, and later traveled to the Scottish Terrier Club of Greater Dayton Specialty Show in Spring 2014 and what a weekend it was!  Tweed was awarded Best in Sweepstakes, and in the regular classes, he went on to win Winner's Dog and Best of Winners, thus completing his championship requirements!  Tweed was bred by Adrian & Linda Sanchez and me, and is loved and owned by Rosie Swanson.  He is out of our GCH. Paloma's Creme de Coco, and sired by the Russian import, CH. Gemma Stonehedge Poetic Justice of McVan, who was Winner's Dog at the STCA National Specialty at Montgomery County in 2012.  Tweed's paternal grandmother, GCH. McVan's To Russia With Love (Knopa) is a Hall of Fame bitch, and the top winning Scottie in the USA for 2014 with multiple breed specialty, National Specialty, and all-breed Best in Show wins, as well as Best of Breed at the prestigious Crufts Dog Show in England.

Tweed recently welcomed SEVEN healthy puppies in his first litter out of GCH. Gyver's Lead Me Not.  We look forward to seeing some of those pups in the show ring soon.

Tweed and his sisters

About a week old

8 weeks old, needed to sit down during the photo session, tail still bang on.

9 weeks old - The day his grandmother, Knopa, won Best of Breed at the prestigious Crufts Dog Show in England!

About 4 months old after his first real grooming job. Tweed, Rosie and me during his first show weekend. He came home with a major and 6 championship points! 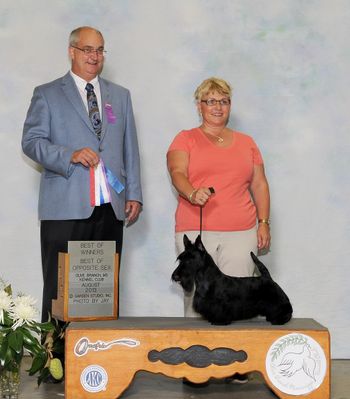 Tweed at his very first show with owner, Rosie Swanson, who owner-handled him to BOS over specials! 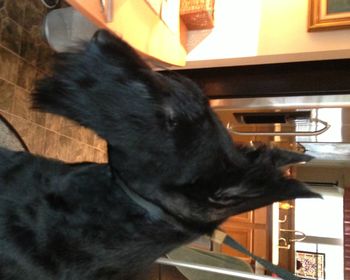 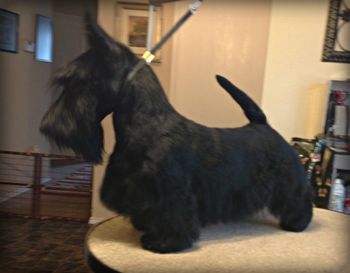 Tweed winning 2nd in the 6-9 Division Runoff at the STCA National Specialty at Montgomery County - Oct. 2013 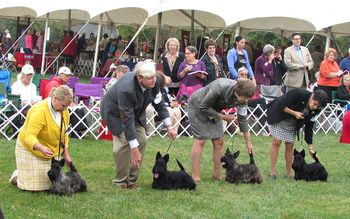 Tweed placing 2nd in the 6-9 month puppy dog class at the STCA National Specialty - Montgomery County in Oct. 2013, selected from a large class of 6-9 month olds 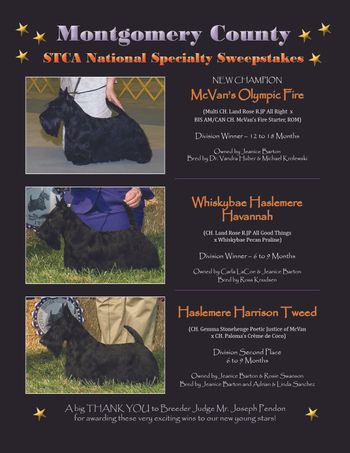 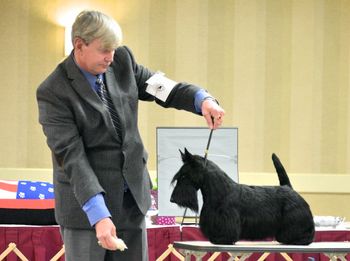 Tweed at his first show

Tweed and his sisters